On Sunday September 18th, more than 75 local residents participated in our second event at this Liberty Tree.

The first was in 2018 where the Cincinnati SAR was the first SAR Chapter in the USA to ceremonially connect the 250th Program to celebrate the upcoming 250 anniversary of the signing of the Declaration of Independence.

This event was held at the Village of Golf Manor’s Volunteer Park on September 18, 2022 in conjunction of the community’s 75 anniversary of the parks founding.

At this time we had four members participating: Robert Bowers, Gary Duffield, Mike Blum and Michael Gunn. After posting the national colors at the direction of the Mayor of Golf Manor, we led the pledge to our flag, then the re-dedication of the Liberty Tree.

This was followed by a Musket Salute to conclude the brief program which kicked off the continuing celebration by residents.

“This American Elm Tree was named after the “Liberty Tree: Our Country’s first symbol of Freedom.” On the morning of August 14, 1765 the citizens awoke to discover two effigies suspended from an elm tree in protest of the hated Stamp Act; hence the beginning of the “Liberty Tree”.

The Sons of the American Revolution consider these re-dedications as National  Events and encourage such fervently during the time leading up to the 250 Anniversary of the signing of the Declaration of Independence.”

We can only hope that this Elm grows to become firm and strong and a towering testimonial to the power of a free country which our founding fathers envisioned. 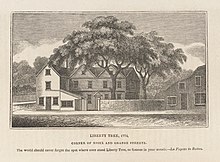 A bit of history – The Liberty Tree (1646–1775) was a famous elm tree that stood in Boston Massachusetts near Boston Common, in the years before the American Revolution. In 1765, colonists in Boston staged the first act of defiance against the British government at the tree. The tree became a rallying point for the growing resistance to the rule of Britain over the American colonies, and the ground surrounding it became known as Liberty Hall.  Sadly it was cut down as an act of revenge to the American Revolution movement.