Remembering the “1772 Gaspee Affair” – was this the starting point? 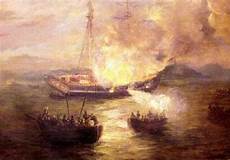 While you were in your high school history class, can you remember what you learned about the “Gaspee Affair”? Events like the Boston Tea Party and the “Shot Heard around the World” at Lexington and Concord are the first things we studied and learned about the American Revolution. Outside Rhode Island little has been studied about this event. After the burning of the HMS Gaspee on the shores of Warwich, Rhode Island almost 250 years ago, the real birthplace of the American Revolution is up for debate.

The Rhode Island colony depended on maritime trade commerce. As Great Britain imposed taxes on the American Colonies, resistance grew. Rhode Island ports were known to harbor pirates and smugglers who smuggled goods in and out of the colonies. King George sent the British vessel, HMS Gaspee, commanded by Lt. William Dudingson to patrol the Rhode Island coastline to stop the import of smuggled goods. Lt. Dudingston over time soon disregarded maritime law. He regularly stopped ships without cause, looting goods and inflicting bodily harm on colonial sailors. Tensions began to grow to a boiling point.

By June 9th, 1772, Rhode Islanders were tired of British harassment. A colonial packet ship, Hannah, commanded by Captain Benjamin Lindsey refused to lower its flag in deference to the HMS Gaspee. This small act of resistance angered Lt. Dudingston and provoked a chase up the bay. Captain Lindsey used his knowledge of the bay to lure the HMS Gaspee into shallow waters at Namquid Point (today called Gaspee Point), where it stranded on a sandbar. 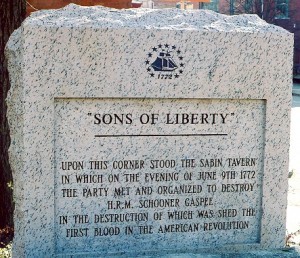 Captain Lindsey sent word into the local town of Providence of the grounding of the British ship. A group of men led by John Brown, founder of Brown University, quickly made plans to end the suffering they’d endured under the Gaspee’s reign.

A raiding party of 80 men set out under the cover of darkness rowing toward the stranded Gaspee. After a brief verbal battle exchange, muskets fired and the raiders boarded the ship. They captured the crew and treated a wounded Dudingston. The crew was moved to shore while the ship was looted and set afire. When her gunpowder was ignited, the ship blew to smithereens.

King George upon hearing of this rebellious act called for a trial of those involved and offered a large reward in return for the culprits. The colonists refused and a spirit of solidarity grew in Rhode Island and quickly spread throughout the colonies. “The Gaspee Affair”, as it became known, was one of the earliest acts of rebellion in the colonies and acted as catalyst in the revolution. This resistance led to the formation of the First Continental Congress of the United States. Rhode Island would become the first colony to declare its independence on May 4th, 1776. The National Declaration of Independence was signed two months later.

It was announced on May 10th, 2022 that after 205 years the search for this British ship had begun. Ms. Kathy Abbass, of the Rhode Island Marine Archeology Project, explained they plan to find the HMS Gaspee with the use of sonar, remote sensing surveys and more. She explained, “We believe there might be a debris field around this vessel. That may not be the actual ship itself, but stuff that could have been embedded in the nearby areas when the vessel explored.” Governor Dan McKee said efforts will be made to make “Gaspee Days” in June a National event.