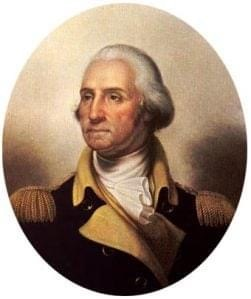 On February 13, 2021 the Cincinnati Chapter held its annual President’s Day Celebration. Like most events for the last year we were able to have a Zoom gathering.

We were fortunate to have over 35 participants join us in the celebration which included three local DAR Chapters and one CAR Chapter. Compatriots Bonniwell, Holland and Crandall gave testimonials, portraying their patriot ancestors on their interaction with General Washington during the war.

The Nolan Carson Memorial Color Guard appeared in uniform to honor General Washington. General Washington finally graced us with his entrance to the meeting. The General was informative, reflective and had a real sense of humor. He even found time in his busy day to have a question and answer session after his talk. All participants thought the event was well planned, entertaining and an hour well spent!

Like Loading...
This entry was posted in 250th Anniversary Event, Color Guard, Local Events, Save Our History. Bookmark the permalink.