The Cincinnati Chapter Supports the Naming of St. Clair Plaza 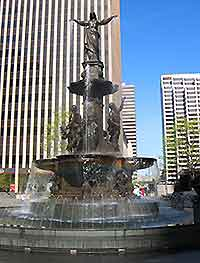 summer of 1987. What an insult to the memory of General Arthur St. Clair, who gave us Cincinnati in 1790, after the Society of the Cincinnati, comprised of Revolutionary War Officers who served until the end of the war. Mr. Jack Gunderman, organizer of the new General Arthur St. Clair Society, believed it would be appropriate to name something after General St. Clair, as this was the

first in more than 110 years that a street somewhere in Cincinnati had not been named after the Revolutionary War hero and statesman. Therefore, Mr. Gunderman suggested naming a site on Fountain Square as “The General Arthur St. Clair Plaza.” on Fountain Square. It is the center of the city and no historical names would have to be changed. It would be a site on Fountain Square to honor General St. Clair. Mr. Gunderman asked local patriotic, military, civil, and community groups to send him letters in support of his proposal. The Cincinnati Chapter of the Sons of the American Revolution enthusiastically supported his proposal. A letter campaign was started within the chapter. No action was ever taken by the City of Cincinnati.

General St. Clair served with General George Washington during the Revolutionary War, on a seat in the Continental Congress in 1785, and was elected its President in 1787, and was named the first governor of the Northwest Territory in 1787. He approved Cincinnati’s first charter in 1802. He died in 1818.