Cincinnati Chapter’s Youth Education Programs on American Revolutionary War History are Receiving a Strong Acceptance by Educators in Cincinnati and the Surrounding Communities!

As of this date, October 3rd, 2019, we have been in 5 schools.  And together, over the last 27 months, have spoken to over 3400 students.  This fall we presented at Turpin High School, and the School for the Performing Arts back in September.

We were at Garfield Middle School in Hamilton on September 13th for the entire day, addressing over 880 students.  A few weeks later we presented to a large homeschooling group at the Lakota Hills Baptist Church; and we are very grateful to Nicole Gallier, who for the last three years has championed our cause, and has done all in her power to open doors for us.

Just yesterday, October 2nd, from 12:30 till 4:00 p.m., along with fellow compatriot presenters, Dr. Michael Gunn, also a former President of our Chapter and now Color Guard Commander, with Mark Holland, Jack Bredenfoerder (former President of our Chapter and now an officer at the State level, and yours truly) presented an assembly and hours of presentations at the Schilling School for Gifted Children.  It is a remarkable center for higher learning, and we were truly received with extraordinary kindness and gratefulness.

Other presenters that often work with us are Greg Ballman, who speaks on the Constitution, Dan Schmidt who explains with the Battle of Trenton and the entire New Jersey Campaign, and Bob Bowers, has two wonderful courses on the Battle of Brooklyn Heights, which is animated and clearly reveals the provenance of God in that Battle, and another course on the factors that led up to the American Revolution.

Dr. Bonniwell’s area of specificity relates to the enormity of the Battle of Yorktown, highlighting how that battle came about, and the fate of Cornwallis and General Clinton after the war.  Dr. Jeff Hartman is another presenter on Life in the American Army, as well as Zach Haines who is our George Washington, and Lee Wilkerson, Chapter President, who presents on various topics, i.e. the Bill of Rights, the History of our Flags, the Regimental Movement in America, Yorktown, etc.

We believe that before next April 2nd, we will be presenting in at least 15 schools, and even booking for the following year.  SAR is fundamentally an educational society, and this work of going into our schools is at the heart of what we do.

Contact Dr. Ed Bonniwell if you would like to explore having these presentations made at your school, college, or any civic and/or private organization.  All of our presenters are extremely knowledgeable, professional men, and in many ways, scholars in their own right, in their area of specificity. 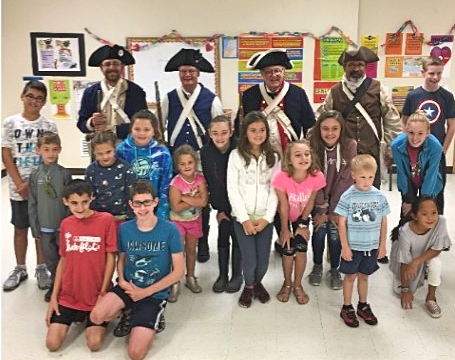