On June 9, 2019 five members of the Cincinnati Chapter of the Sons of the American Revolution joined another member of the Ohio SAR for a 400 mile trip to the Padgett’s Creek Baptist Church in Union, South Carolina. The cemetery is next to the church is where Robert White, a Revolutionary War Patriot and founding member of that church, was buried. His tombstone is very worn after 170 years and there is no indication of his status as a Patriot to these United States of America visible there. One of his descendants is George Stewart a member of Cincinnati SAR. Therefore, we went to this very remote location to mark Robert’s grave and remedy that omission.

Along with the Ohio contingency of SAR members was their wives who came along to support their husbands. First, was George Stewart who learned that Robert White was one of his Patriot ancestors, so he and wife Pamela helped arrange the details of this marking ceremony. Other members of Cincinnati SAR there were Chapter President Turner Lee Wilkerson and first lady Shari; Jack Bredenfoerder and wife Laurie; Gregg Ballman and wife Kathe; Michael Gunn and wife Carole; and Wm. Robert Hill from the Hocking Valley Chapter in central OH. Joining us from South Carolina’s SAR was the South Atlantic District Vice President Daniel Kieth Woodruff.

The Padgett’s Creek Baptist Church Pastor Rev. Carrol Caldwell welcomed us into the structure founded in 1784 for the beginning part of the Robert White Ceremony. Emcee and descendant Jeanie Russell, with the Florida Three Rivers Chapter DAR took over after the posting of Colors by the Ohio/ South Atlantic District Color Guard and the Invocation by Pastor Caldwell. She introduced SCDAR Regent Elizabeth Billham who presented Greetings and a prayer; Jack Bredenfoerder who led us in the National Anthem; Joseph Smith who led us in the Pledge of Allegiance; Daniel Woodruff, SCSAR Regional VP General and David Smith who brought greetings; Nat Kaminski who brought greeting from the South Carolina Society as President; Greetings from Turner Lee Wilkerson, Cincinnati SAR; and finally a brief history of Robert White. We then processed to the gravesite led by the South Atlantic District Color Guard, commanded by Michael Gunn of Cincinnati SAR’s Nolan Carson Memorial Color Guard.

The forecast of rain, being a 90% chance, was intimidating with light showers at 10:30 AM before the ceremony began at 11AM. However, the darkened skies held back until after 1:30 PM when we put the muskets and flags into our cars and left the little church with our happy Compatriot George Stewart having honored Patriot Robert White. 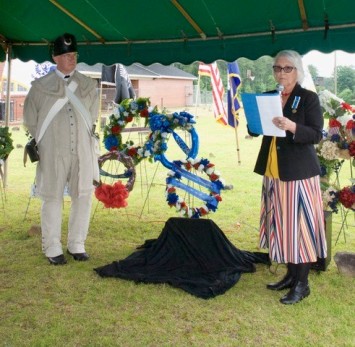 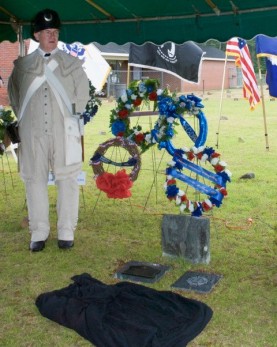 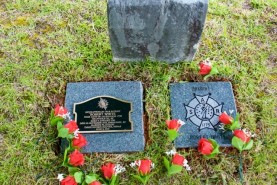