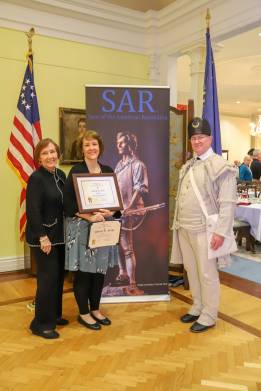 This year’s awards ceremony was attended for the very first time by His Excellency George Washington (Zach Haines) who spoke eloquently on The Revolutionary War in the first-person using Washington’s own words. It was excellent and completely engaging. He also presented the award for the winner of the Essay Contest.

Cincinnati SAR President, Lee Wilkerson, after the placing of the colors by the Colorguard, and the Pledge of Allegiance, read in the SAR pledge. Then Bob Hill, in complete Dragoon Colonial Uniform from the Hocking Valley SAR Chapter, broke ranks from the Colorguard corridor, walked to the very back, saluted His Excellency George Washington. Then doing an about face, he smartly marched forward, announced and presented His Excellency. Zach Haines (Our George Washington) spoke in the first person using the language of Washington, and it was most engaging.

We then inducted a new SAR member, 96 years of age, William Hubert Malicote, father of compatriot Sam Malicote, and veteran of the US Navy Submarine Service in WWII. President Lee Wilkerson stated it so magnificently, “We felt it was befitting for the youngest generation to witness and hear from the Greatest Generation as a part of their continuing education in the history of patriotism in America.”

The secretary of our chapter, Clayton Randall, led the Mia/Pow Remembrance Ceremony, and then Rev. Dr. Ed Bonniwell, Chaplain of the Cincinnati Chapter, was then brought forward to lead in the invocation and dinner blessing. After dinner, President Lee Wilkerson started off the awards ceremony by introducing Dr. Ed Bonniwell, Chairman of the Youth Committee, with direct oversight for the Poster/Brochure Contest and who coordinated the entire banquet.

Compatriot Ed Bonniwell recognizing
Mrs. Kathy Schmid of the Cincinnati Woman’s Club
for sponsorship of our Gala Event on this occasio

Dr. Bonniwell brought Kathy Schmid forward and presented her with a bouquet of flowers, recognized his secretary for outstanding work, and thanked, from the podium, Brian Duquin, general manager of the Cincinnati Women’s Club for being such a prince in helping us to take our banquet forward successfully.

This year we did not have an oration participant and so, we elected to say nothing about that, however, Dr. Gunn did engage several teachers about helping to fill this gap in next year.

The runners up in both contests were then brought forward and recognized, and then the winners of the Poster/Brochure Contest. Dr. Bonniwell’s team of presenters, Greg Ballman, Dan Schmitz, Bob Bowers, and Dr. Gunn beautifully handled that aspect of the program. Other members of the team were Dr. Jeff Hartman, Lee Wilkerson and Vice President Kerry Langdon.

The Cincinnati SAR essay winner, Samuel Douglas Seibert, was recognized by Zac Haines, appearing as His Excellency General George Washington, as the Ohio Society essay winner. Samuel’s essay was printed on the event program for all the attendees to read. The essay, Unalterably Determined, about John Adams, Samuel’s essay also won first place for the state of Ohio and will be entered into the National SAR contest at the SAR National Congress in Houston, Texas this coming July. 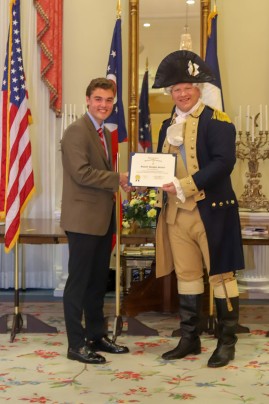 Samuel Seibert receiving the First place prize and check as the winner of the George S. And Stella M. Knight Essay Contest

Many thanks are due Dr. Ed Bonniwell for chairing the Poster and Brochure Committee. The success of all these award programs can be credited to the chairmen and their committees for the various contests. Zachary Haines – Essay Chairman; Scott Snow – Eagle Scout Chairman; Dr. Michael Gunn – Oration Chairman; George Stewart – American History Teacher Chairman, and Dr. Ed Bonniwell – Poster and Brochure Chairman.

The evening will remain a cherished event in the minds of our Cincinnati compatriots, as well as participating teachers, students and their families. Much gratitude was expressed to teachers who instill our youth with a profound sense of honor and patriotism. It was very gratifying to see so many young people excited about American History and the founding Patriots of our country! The kids melted our hearts as they received their awards. It’s very possible that this kind of incentivizing may create in our young people passion for our Colonial History, government and politics in the tomorrows of their lives. We wish them all well as they pursue their American Dreams. 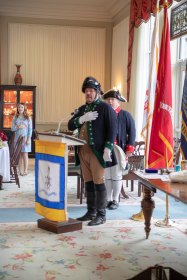 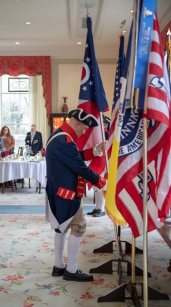 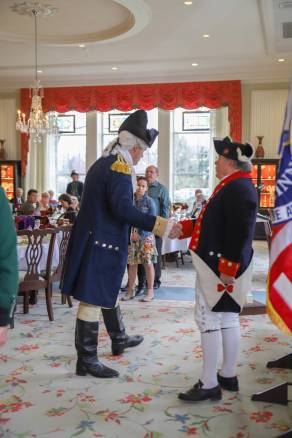 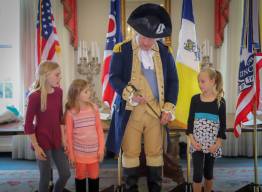 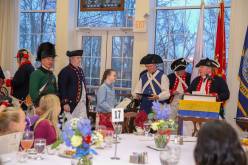 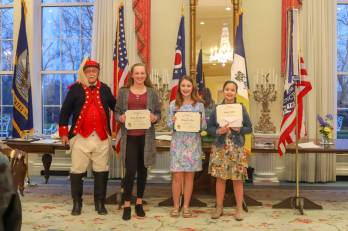