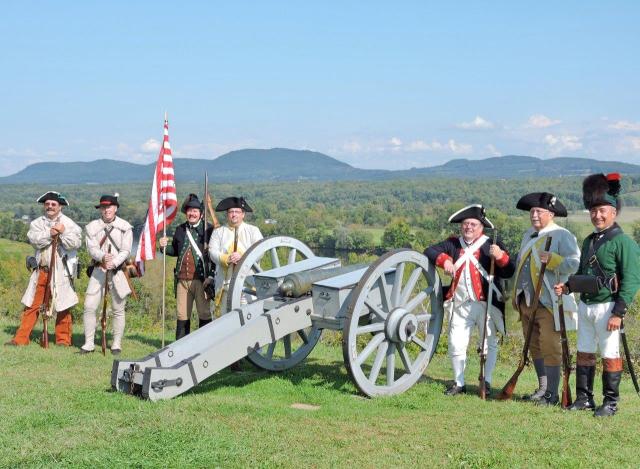 Seven members of the Cincinnati Chapter of the Sons of the American Revolution (CCSAR) have just returned from a journey to upper New York where they attended and participated in an anniversary ceremony Honoring those brave Patriot Soldiers who fought in the Battles at Saratoga. The families and/or spouses of several accompanied them on this momentous occasion. Many of the CCSAR who attended had Patriot ancestors who were in these battles as members of the American Army.

On this day in history, September 19, 1777, the Battle of Freeman’s Farm is the first of the Battles of Saratoga which culminated in the surrender of British General John Burgoyne’s army. The battles were a major turning point in the American Revolution that encouraged France and Spain to join the war on the American side.

In 1777, the British began an effort to divide New England from the middle and southern colonies. The plan was to send General Burgoyne down Lake Champlain from Quebec; Brigadier General Barry St. Leger would cut across New York from the west; and General William Howe would come from New York City up the Hudson River. The three groups would meet at Albany.

General Burgoyne left Quebec in June and reached Saratoga by mid-September, but St. Leger’s force was stopped at Fort Stanwix and turned back by Benedict Arnold. General Howe took the bulk of his forces to capture Philadelphia, instead of going to meet Burgoyne, leaving Burgoyne isolated. In addition, Burgoyne lost 1,000 men at the Battle of Bennington who were supposed to bring him support. Burgoyne had trouble getting supplies and communications across the vast wilderness and most of his Indian allies abandoned him after the loss at Bennington.

The American army under General Horatio Gates had dug in at Bemis Heights, about ten miles south of Saratoga. On the morning of September 19, Burgoyne decided to attack. Benedict Arnold understood that Burgoyne would attack the American left flank and ordered his men through the wilderness to meet him.

Fighting took place all day around the farm, with both sides variously winning or losing the battle. The battle finally went to the British when German Baron, Friedrich Adolf Riedesel attacked the American right flank. Darkness began to fall and the Americans retreated to their defenses at Bemis Heights.

Burgoyne won the first of the Battles of Saratoga, although it cost him 600 men, which he could not afford to lose, including most of his artillery soldiers. The Americans lost half that number. Following the Battle of Freeman’s Farm, Burgoyne was faced with a perplexing decision. Should he continue the battle, or wait for reinforcements? He quickly sent word to General Henry Clinton in New York, who had been left in command there with a small force to guard the city after General Howe left for Philadelphia.

Clinton quickly sent troops up the Hudson in an effort to distract Gates and hopefully pull him away from Burgoyne. Clinton’s help finally came too late though. Burgoyne went to battle again on October 7 and this time Gates’ army was victorious. Burgoyne was forced into retreat and surrendered his entire army on October 17th at Saratoga.

The victory caused celebration throughout the colonies, which were especially despondent after the capture of Philadelphia in September. France and Spain joined the war officially upon seeing that the Americans could truly stand up against the British army. Their involvement forced Britain into a worldwide war that reduced British numbers in America and eventually led to their defeat at Yorktown.

We in the CCSAR were given the unique honor of providing the Musket Salute at the event as well as posting the colors which included Morgan’s Flag, the CCSAR Flag and that of the 15th Massachusetts who were at the Battles. Two of us were wearing uniforms of the 15th Mass. Attending were Gregg Ballman, Bob Bowers, Chapter President Jack Bredenfoerder, Mike Gunn, Bradley Jarard, Shaun Smith and OHSSAR Secretary Lee Wilkerson.

Wreaths were presented by Lee Wilkerson for the Ohio Society, Jack Bredenfoerder for CCSAR and Mike Gunn for the Germany Society of SAR.

Article by
Michael B. Gunn, Ph.D.,
Past President, Cincinnati Chapter of the Sons of the American Revolution

Line up and marching in for the ceremony. 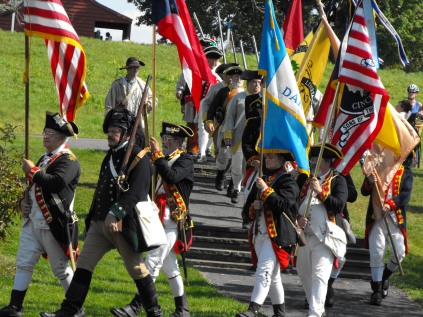 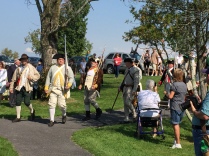 Color Guard for the ceremony

Mike Gunn presents wreath for the Germany Society of SAR 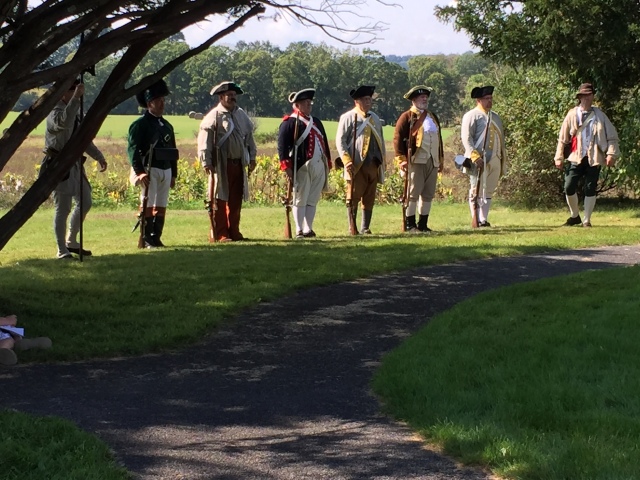 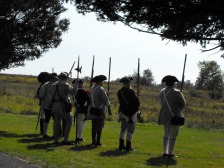 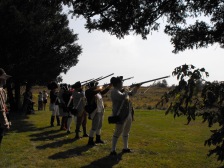