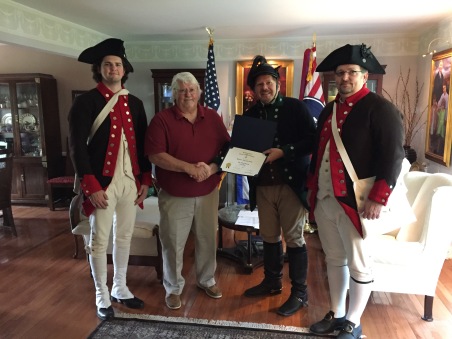 On May 18, 2017, CCSAR President Jack Bredenfoerder inducted Philmore H Smith, Jr. into the CCSAR. Compatriot Philmore H Smith is a resident of South Carolina and Massachusetts. Phil is the father of Compatriot Shaun P Smith and grandfather of Compatriot Connor Smith. Shaun has been diligently working on his supplemental applications and he finally identified a Patriot Ancestor on his father’s side of the family that could be processed. His application was approved on April 14th, 2017.

Phil came to Ohio to attend a conference and to visit with his family. When President Bredenfoerder found out that Phil was visiting, he suggested that we surprise Compatriot P. Smith with an impromptu induction ceremony. President Bredenfoerder hosted the induction at his home. Compatriots Shaun and Connor Smith, who are active members in the Nolan Carson Memorial Color Guard, were in uniform for the induction ceremony.

The Patriot Ancestor that the Smith’s were honoring in this ceremony was Tilley White of Lancaster, Massachusetts and Addison, Maine. In 1775 he was enlisted as a Private in Capt. Eleazer Crabtree’s co. , stationed at Frenchman’s Bay for the defense of the seacoast. Additionally, he was a Private in Capt. Daniel Sullivan’s co., Col. Benjamin Foster’s (Lincoln Co.) Regiment. He was also in Capt. John Hall’s co. in the same regiment. He took part in the Penobscot expedition and was in service at Machias for its defense. 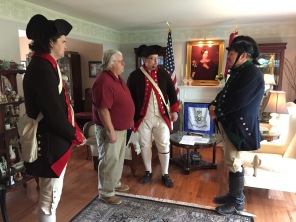